My favourite genre of books is crime as I have previously shared and that I much prefer to read a book series than a single novel. I feel as though I can get much more engaged and attached to the characters and storylines in a series and I get much more interested in the plot. A series often allows more time to be spent exploring the characters and their lives. I found it hard to choose just 5 but I have managed to narrow it down to my top 5. The following is my decision (they are in no particular order); 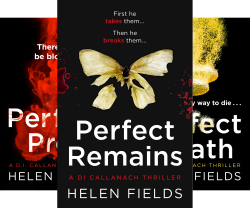 The DI Callanach Series is a book I have previously written about on my blog so if you want more information on the series and an author Q&A head over to that post. This series follows a French detective who moved over from Interpol to the Scottish Police service after a personal issue. It follows his journey getting used to his new life in Scotland while being a detective in the police force. We see how his relationships with his colleagues evolve and how he comes to terms with this huge change in his lives. Not only do we get to appreciate the characters we are given exciting plots and storylines throughout the series. We see how they investigate crimes and how these crimes affect them in a personal way.

I have also written about this series previously so please go and read that if you would like to know more about the series and the author. The series focuses on service castaways and how they cope with the fact they are sent to Slough House. Slough House is where the castaways are sent instead of being fired due to something they have done or personal issues.  It follows a series of character as they come to terms with being sent to slough house and we get the chance to gain some deeper knowledge on each character which also makes the storylines much more interesting as we can relate them to each characters situation.

The Carnivia Trilogy by Jonathon Holt is a series I absolutely loved and I thought the trilogy was incredibly interesting and unique. The series is set in two different Venice’s; one in the real world and one in a virtual world. It is focused on an online world, named Carnivia, where anyone who enters is completely anonymous and for this reason it is a place where a high amount of crime is inevitable. It follows life inside the virtual world but combines it with the real world as we see the Carabiniere (Italian paramilitary police force) Captain investigate some of these crimes involving Carnivia.

Noughts and Crosses by Malorie Blackman are a series that I read when I was younger due to my sister’s recommendation and I found it very fascinating. It is a series based upon an alternative world where Europeans were made the Africans slaves. It looks at this discrimination in another way and how it would have changed things. On top of this it features a love story between people from the two sides and how they deal with this in that time. It is incredibly powerful and poignant and I would easily recommend this to anyone who is interested in reading a new book. It allows you o think about what would have happened if it was different whilst exploring an exciting storyline and characters.

I would recommend all of these series and I hope you get the chance to read them.