Theme: Into the Wild

This month saw another release of the subscription box ‘ Book Box Club’ but this wasn’t any old box as it was the 2 year anniversary of the company. This meant that there was an extra goodie within for those who bought the box.

Upon opening the box you are presented with the leaflet stating the theme and what’s included alongside the envelope with the date of the exclusive book club meeting.

These leaflets are always beautifully illustrated and this months was no exception. It was fitting with the themes as it features simplistic trees along side a bear and a fox.

Within the box there is an abundance of bookish goodies including a campers picnic bag by http://www.sassandbelle.co.uk so you can take your snacks on your adventures with you. There is also an into the woods scarf by Book Box Club which features quotes from the featured book. There is also a massage bar by Naked Sister to relax yourself after your exciting adventures alongside a Caveswater Candle. On top of all those goodies there is also a little pad to keep your plans together. 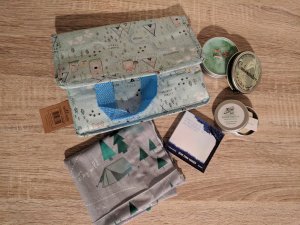 A lost boys notebook designed by Georgine Makes is also included in the box so you can journal and plan all your exciting adventures alongside sample chapters from Neal and Jarrod Shustermans book ‘Dry’.

As this was the two year anniversary of the company we were treated to a bonus book. The bonus book is ‘Damsel’ by Elana K. Arnold which isn’t due to be released until November. This book features a handsome prince, a distressed damsel and a fierce dragon with excitement throughout.

The featured book this month is ‘The Other Side of Lost’ by Jessi Kirby which is a story about when you take the time to remove yourself from technology and take an adventure. It follows a social media star who swaps her technology dependant life for a solo hike into the woods.

Yet again I highly recommend this subscription box and hope that you would enjoy Kate and Libby work as much as I do.