‘Perfect Crime’ by Helen Fields is the 5th instalment in the DI Callanach Series. It focuses on Luc as he continues his life as a detective in Scotland whilst being haunted by his past.

I love this series anyway as it is well written with great characters in my favourite genre and this instalment was no different. I enjoyed seeing the comradery between the officers at MIT and how these relationships have evolved throughout the series.

The characters are realistic and are not represented as perfect and the best police officer. They have their fair share of problems and we get to see them cope with this. I really like Callanach and Turner but in this book I felt myself becoming frustrated with their relationship. They want to be more than friends but it doesn’t quite happen. Maybe this was the writers intention and if so it worked but I just wanted something to happen between them! I like to see other characters like Tripp and lively make an appearance where we get to see them evolve as they spend more time in MIT.

You get to see MIT investigate a series of suspicious ‘suicides’ and as more and more deaths occur we see them work through the all the outcomes. I like to read these parts of the book as much as the personal stories of the characters as I find it provides a balance between the excitement and the sincere.

It is well structured and well written and engaging. I read this book pretty quickly as I couldn’t put the book down. I wanted to continue to read more and more to see what happens next.

I would highly recommend this book and the series as you will get the chance to see the characters evolve and develop. ( although I would say that you don’t have to)There is also another instalment due to be released in 2020 and I also can’t wait to read that!

(PS please comment if you have ever read these books or have any other recommendations. )

I recently took a trip to the book shop and bought some more books!

The first book I picked up was ‘Perfect Crime’ by Helen Fields. I already knew that I wanted this one as I love the series. It is the latest book in the DI Callanach series and if you have read my previous books you know I love this series. It follows Callanach and Turner as they investigate a crime and search for the perpetrator across Edinburgh.

The second book I picked up was ‘I’ll be gone in dark’ by Michelle McNamara. It is a true crime novel that follows one woman’s obsessive search for the Golden State Killer. I picked this up so I could explore another genre which I imagine I will like!

The last book I bought was ‘The book of Hidden Things’ by Francesco Dimitri. This author is well known but tends to write in his native language and this was debit novel that was written in English. This looks at 4 Friends who make a pack to meet up once a year at the same spot , when one of them doesn’t turn up they try to figure what has happened. Whilst they do this they uncover many secret things. 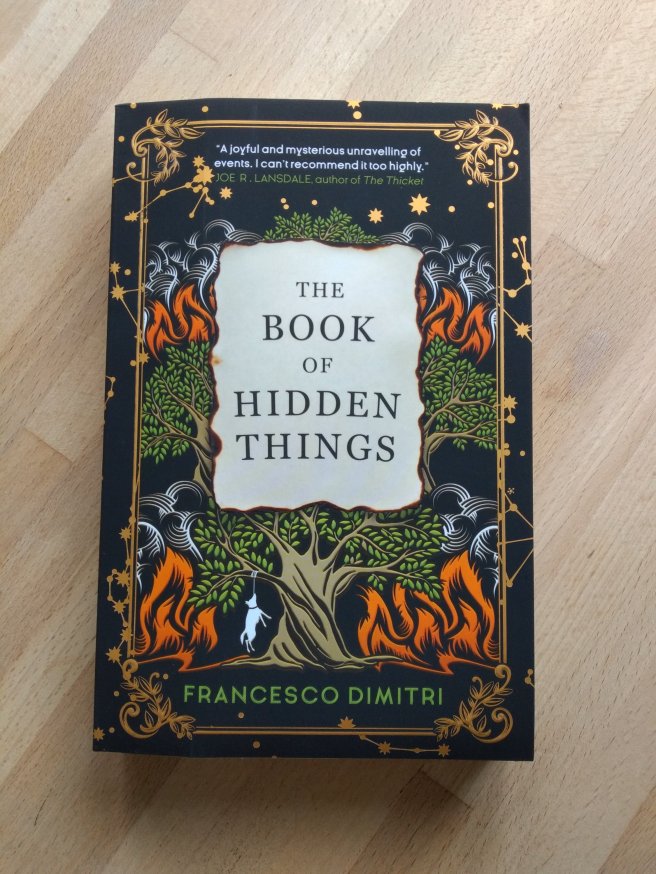 Perfect Silence by Helen Fields is the forth installment of her DI Callanach series. Each book in this series currently has an over 4 star rating on good read and is one of my favourite series.

I have previously written about the previous 3 books as well as an Author Q&A with Helen Fields that you can check out before or after reading this.

I thought that this book was really good and I enjoyed reading it. It delved further into the lives of DI Callanach and DCI Ava Turner. I think that there friendship in this book carrying on from the previous booked created a ‘will they, won’t they’ sort of anticipation throughout which engaged me as a reader.

As with the previous book it is based upon a crime that has taken place and the ivestigation into these crimes. This is perfect for those interested in crime and police procedure books but in this novel there is extra depth and almost a second plot with the characters.

I find both of the main characters likable and having both been through tough times you see them develop and cope with these. In this book I believe that Ava Turner was a bit more unlikable due to the superiority in the book however the previous books really help to add to her character. In this novel she is a strong and determined Detective Chief Inspector who isn’t scared to stand her ground to ensure that the victims of these crimes are treated with the respect they deserve and find justice. I find this quite inspirational as a female also. DI Callanach is also still very likable and I think they way he has been written and interacts with the other characters really aids this. He has been through a trauma in his life and that wasn’t just forgotten about in this book so we were able to see how he has coped and progressed in his life after this. These two characters themselves make the books worth reading.

There were two main investigations in this book; one where the bodies of young females are being found alongside dolls made out of the victims skin and one where the letter ‘Z’ is being carved onto the drug users of the cities faces. Both these crimes are gruesome and gory which isn’t what everyone would want to read but I found that there was a good balance between the crimes themselves and the investigation. This made it a good read as we get to see what these police officers are doing to help these poor victims.

Overall, I really enjoyed this book and upon reading other reviews people were saying that this installment was not as good as the other 3. I have to say I agree with this on a certain level as I feel that the characters developed less throughout the novel however I would let this stop you from reading this book. It is a great installment within a series and although you don’t necessarily need to read the previous books before you read this, I would highly recommend that you do as it gives background to why the characters are like how they are.

There is also a fifth installment of this series due to be released in April which I am so excited to read!

At the moment I am currently reading ‘The Perfect Silence’ by Helen Fields. This book is the latest installment in the DI Callanach Series. If you have read my previous blog posts you will know that I love this series and I am really excited to finish reading this one.

The book is based upon the lives of DI Luc Callanach and DCI Ava Turner as they tackle the case of a murdered young woman. The case is peculiar and for this reason I am finding the book really interesting. It is quite unique and unlike the previous books in the series. This alongside the knowledge we already have and are discovering about DI Callanach and DCI Ava Turner its adds dimension to the story line.

I have read about half up until this point and I can’t wait to read more and explore the story and see the investigation go further. The book features gruesome crimes yet exciting friendships.

Upon looking at reviews, this book seems to get great ones. With majority being 4 or 5 stars on amazon however I did notice that a lot of the reviews said it was good but not necessarily as good as the previous books in the series. I am excited to see if I think that myself.

I would highly recommend reading the first three installments in this series as i absolutely loved them . We see a horrible crime with an exciting investigation whilst delving into the lives of the two main detectives.

I have many books that I come across and really want to read so therefore add it to my to-read list. I have decided to share this list so if you are looking for a new book to read you can have a look at these

I am really excited to read this book and see what it is all about. I would like to see how the author tackles this unusual storyline.

Many Thanks, Caitlin x

(PS please feel free to comment if you have read or want to read any of these books.)