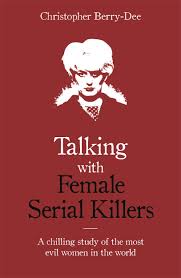 ‘Talking with Female Serial Killers’ is a book written by Christopher Berry-Dee, released in May 2018, which looks at the most chilling female serial killers in the world. Christopher Berry-Dee is a criminologist and author who has previously released books on true crime including ‘Talking with Female Serial Killers’ and ‘Monster’. The book looks at those women who not only kill but kill again and again.

I enjoyed reading this book as I find learning why people kill fascinating however I felt that the book was confusing at times skipping between stories and events. The information given was necessary in explaining the crimes but I think it could have been written in a smoother structure as at times I felt lost and was insure what part I was reading.  I also think this book’s title was misleading as there were no real interviews with any serial killers. There were quotes from previous interviews conducted by Berry-Dee and others however which helped to understand where the convicted females stand.

I have read a lot of reviews on this book and feel that a lot of them were unfair. The book is an interesting read and I did enjoy reading it even after what I said above. A lot of reviews stated that it was badly written and full of too many adjectives and metaphors however I do feel that this was the case due to the writer trying to get people more engaged as well as adding a little bit of humour to a dark book.

Overall, I would say that if you are interested in reading about female serial killers then it is a good book however do not expect for there to be lengthy interviews with them. I personally quite liked this book but do be aware than many people didn’t enjoy this book. 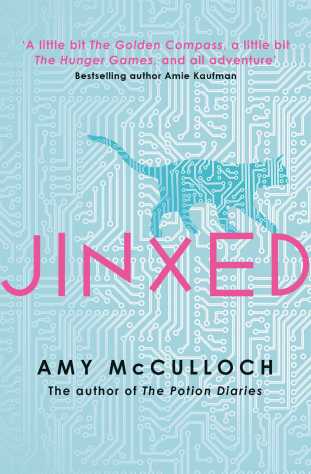 Jinxed by Amy McCulloch is a YA science-fiction book that centres around a world of engineering and coding. In this world there is a young girl named Lacey Chu whose dream is to become a companioneer for the tech company Moncha. This company created the BAKU, your very own robotic companion who replaces the role of your smart phone.

I found this book was really entertaining and exciting as you got the chance to learn about this world and about what happens with the BAKU. It is also exciting to see a book based upon engineering and coding with a female lead character. The character of Lacey is very likeable and realistic and I think would resonate with young female readers as she shows that you can achieve your dreams. Lacey is a talented engineer whose best friend is a talented coder who are exciting as it allows the book to promote strong female leads in a world once thought of as a male world.

This book mixes the world of new technology and inventions with teenage drama and friendships. I think this is also a reason as to why I liked this book as it blends the excitement of the BAKU battles and new school drama effortlessly. You see Lacey deal with making new and maintaining friendship whilst exploring this exciting and eventful new world.

The ending leaves questions as well as answers as it ends leaving us wonder what happens to Lacey and her BAKU. It ends on a cliffhanger which leads you to think there is potential for a blossoming series within this technology focused world. Overall I really enjoyed this book as it was entertaining and realistic with strong leads. It didn’t really feature any of the hard-hitting topics that I would usually read about which added some light relief to my reading experience.

I would highly recommend this book and feel that it was well-written, structures with good characters.