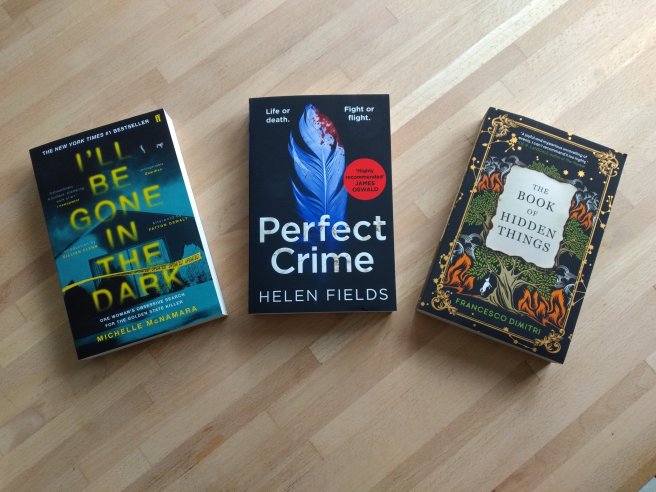 I recently took a trip to the book shop and bought some more books!

The first book I picked up was ‘Perfect Crime’ by Helen Fields. I already knew that I wanted this one as I love the series. It is the latest book in the DI Callanach series and if you have read my previous books you know I love this series. It follows Callanach and Turner as they investigate a crime and search for the perpetrator across Edinburgh.

The second book I picked up was ‘I’ll be gone in dark’ by Michelle McNamara. It is a true crime novel that follows one woman’s obsessive search for the Golden State Killer. I picked this up so I could explore another genre which I imagine I will like!

The last book I bought was ‘The book of Hidden Things’ by Francesco Dimitri. This author is well known but tends to write in his native language and this was debit novel that was written in English. This looks at 4 Friends who make a pack to meet up once a year at the same spot , when one of them doesn’t turn up they try to figure what has happened. Whilst they do this they uncover many secret things.

‘Talking with Female Serial Killers’ is a book written by Christopher Berry-Dee, released in May 2018, which looks at the most chilling female serial killers in the world. Christopher Berry-Dee is a criminologist and author who has previously released books on true crime including ‘Talking with Female Serial Killers’ and ‘Monster’. The book looks at those women who not only kill but kill again and again.

I enjoyed reading this book as I find learning why people kill fascinating however I felt that the book was confusing at times skipping between stories and events. The information given was necessary in explaining the crimes but I think it could have been written in a smoother structure as at times I felt lost and was insure what part I was reading.  I also think this book’s title was misleading as there were no real interviews with any serial killers. There were quotes from previous interviews conducted by Berry-Dee and others however which helped to understand where the convicted females stand.

I have read a lot of reviews on this book and feel that a lot of them were unfair. The book is an interesting read and I did enjoy reading it even after what I said above. A lot of reviews stated that it was badly written and full of too many adjectives and metaphors however I do feel that this was the case due to the writer trying to get people more engaged as well as adding a little bit of humour to a dark book.

Overall, I would say that if you are interested in reading about female serial killers then it is a good book however do not expect for there to be lengthy interviews with them. I personally quite liked this book but do be aware than many people didn’t enjoy this book.